HOW THE GENDER WAGE GAP LIMITS WOMEN IN LEADERSHIP

The gender wage gap has a direct effect on the number of women leaders in a country.

The gender wage is caused by many factors. This article will focus primarily on those that affect leadership.

The disparity between men and women’s income can be traced not only to a lack of recognition of women’s economic worth, but government policy to reinforce that lack of recognition. In the early part of the 20th century, governments and employers endorsed the concept of the family wage. This meant that a male worker would be paid enough to support a family. A woman would only be paid enough to support herself. The family wage led to setting women’s salaries at about two-thirds of the male wage. The reasoning at the time for the family wage was that working women would only be supporting themselves until marriage, which was of course the end goal to employment. Men, however, would be supporting a family. (There was no consideration given in this formula for situations of women whose husbands had died or were disabled, leaving their wives to financially support a family.) We know that ideas change slowly and cultural beliefs even slower. In 1987, while working in a sales and marketing position in Canada, I discovered that a fellow who was hired the week after I and who had several years less experience, was hired for at a salary of $2,000 a year higher than I had been. I asked my sales manager about it and he shrugged and said that the newer account representative “has a family, you know”. Although the manager probably wasn’t instructed to pay me less or the other employee more, the history of the wage gap continues to haunt us in unconscious bias.

Women have been led to believe that if they match men in educational attainment, they will nullify the gender wage gap. To that end, we have seen 20% of all Canadian women complete an undergraduate university degree. Since 2002, women have earned 32-35% of all MBAs. Based on Statistics Canada’s 2011 National Household Survey, in the age group of 25-34, women hold more bachelor, medical, and master degrees than men. In the age 55-64 age group, women hold more than 45% of the bachelor and master’s degrees. Yet when we look at the numbers of education at the bachelor degree level and down, we can see that extra education only takes us so far in reducing the gender gap.

When women and men have:

• Some post-secondary education – women make 72.6% of what the men make

• Post-secondary diploma – women make 71.6% of what the men make

So we can see that as women gain more education, the wage gap narrows. But after a post-secondary diploma, women’s wages stall and the gap starts to widen.

It seems logical that jobs that are more dangerous, involve shiftwork or specific training should be better paid, yet this does not hold up statistically.

For example, compare a Licensed Practical Nurse (LPN) to a cable television service and maintenance technician (CTSMT). To become a LPN requires a two year college diploma and a personal financial commitment of $10,500 in tuition. To become a CTSMT requires one to two years of on the job training and no personal financial commitment. One would think that the LPN would make more money, considering the longer educational training, personal financial commitment, not to mention the shiftwork inherent in the position, and possible exposure to violent or infectious patients. However, the median earnings of the LPN is $38,261 and the CTSMT is $51,030. LPNs are 90% female and CTSMT are 97% male. (Province of Ontario data)

With the exception of the province of Quebec, approximately 40% of children in Canada under 5 years of age are cared for by parents and 25% are cared for in a licensed child care facility – leaving a gap of 35% to be cared in a variety of other ways (relatives, friends, unregulated child care facilities). Many parents have trouble finding a spot in a suitable child care facility. The economic impact on parents can be extremely high. In the Province of Ontario, women make up 94% of part-time workers who state that caring for children is the reason they didn’t work full time. Quebec, which has the most comprehensive child care program for children ages 0-12, provides universal care for $7 a day, resulting in a rise in the female participation rate in their provincial work force from the lowest to the highest in Canada. This has resulted in moving children above the national average on standardized test scores and families experiencing a 50% reduction in poverty.

Women continue to usually be the parent in a double income family who takes the day off if a child is sick or the mother-in-law is in for day surgery. Single parent families (of which the majority is led by women) have little choice as to who that parent will be when a child is sick. When we consider the issue of gender wage gap, there are many causes. The more we understand about each aspect and develop strategies to mitigate the causes, we may begin to see a quicker reduction in the 12-31% inequity.

Jeanne Martinson, MA is a professional speaker and bestselling author on issues of diversity. To read more about this subject, see Jeanne’s new book “Tossing the Tiara – Keys to Creating Powerful Women Leaders”. 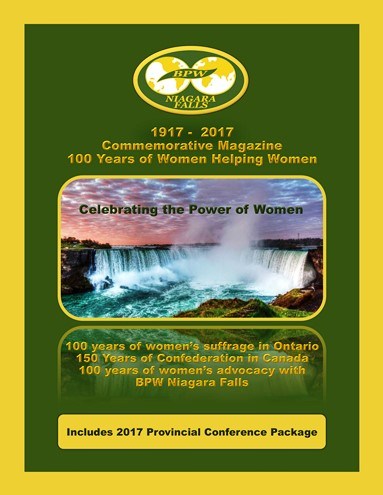 Sandi and I had the extreme honour of attending a dinner meeting with the lovely ladies from BPW Niagara Falls. Never have we been so warmly embraced by a group. Our stories are not pretty yet they received us with grace and honour. We feel truly blessed to have basked in the glow of energy emanating from these lovely souls.

~~~~~~~~~~~~~~~~~~~~
BPW Niagara Falls meetings are always Fun and/or Informative. I learned so much from  the presentation on recognizing the differences between our gender’s heart attacks and that of men, and what to do during the hands on practices, to the beat of the BEE GEEs “Staying Alive”. — Niagara Falls member since 2015